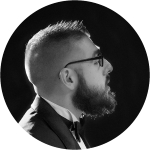 Mr. Santanello, originally from Vernon, New Jersey, is entering his 11th year teaching, and first as the Director of Bands at North Penn High School in Lansdale, Pennsylvania.  He spent the previous ten years as the Director of Bands at Strayer Middle School in Quakertown, Pennsylvania.  In addition to teaching at Strayer, he was the Co-Director of the Quakertown Community High School “Panther” Marching Band and directed one of the high school’s two jazz bands.  Mr. Santanello earned his Bachelors of Music in Education from West Chester University of Pennsylvania in 2009, and his Masters of Conducting from the American Band College of Sam Houston State University in 2014.   Mr. Santanello is a French horn player, having spent the past eight years as the principal horn of the Pennsylvania Symphonic Winds in Wayne, PA.  He also plays with the Berks Opera Company in Reading, PA, and the Liberty Wind Symphony in West Chester, PA and several other concert bands and orchestras.  He has a small horn studio in Quakertown and his students have been selected to the PMEA Region, District and All-State Festivals as well as performed in the prestigious Philadelphia Youth Orchestra.  Mr. Santanello was named the 14th director of the Quakertown Band in 2017.  The band is Bucks County’s oldest musical organization, continually performing since 1877.  Mr. Santanello lives in Quakertown with his wife, Kaylee, also a teacher, and cellist.

Mr. Haddad is a graduate of North Penn High School and earned his bachelor’s degree in music education from West Chester University.  He began volunteering for the NPMK when he graduated from high school until he was hired as a full time staff member in 2012. He was named the Winter Percussion Director in 2015 and Assistant Band Director under Ted Heller in 2017.

Peter Neu is a graduate of the Philadelphia University of the Arts with graduate studies at Villanova, West Chester and Temple Universities. Since 1985 he has worked as an instrumental music teacher in the North Penn School District directing concert, jazz and marching bands, as well as other small ensembles at the middle and high school levels. Mr. Neu resides in North Wales with his wife Michaeline and children Nicholas and Mikayla.

Miranda has been involved with colorguard since 2007 when she was a Marching Titan at Central Bucks South HS. She’s also spun with Kutztown University, Field of View A, Black Watch and Cadets2. Miranda has been teaching colorguard for 5 years; this will be her second season of directing NPKV. Miranda is also skilled in graphic design and loves spending time with her three rabbits.